With the latest lockdown measures instituted in the province of Ontario, the team at Form & Build Supply would like to provide some guidance on our operations. Form & Build supplies construction materials to a number of the sectors in the construction industry deemed essential by the government. Therefore, we will continue to accept and fulfill orders throughout the duration of the lockdown. To ensure that our employees and customers remain safe, we ask our customers to abide by the following rules:

We appreciate everyone’s patience and understanding and please feel free to reach out to your local branch if you have any other questions. 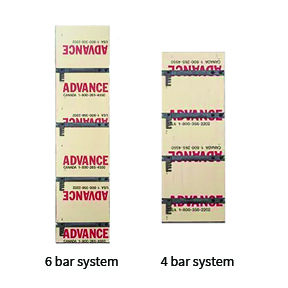 Concrete forming literally builds the foundations on which our homes and cities are constructed. For almost 45 years, Form and Build has been in the business of providing the highest-quality products to the forming industry. Our knowledgeable staff have advised customers on forms and forming accessories that help get the job done faster and with less hassle.

The cornerstone of our company’s forming offering for many years has been the Advance Panel System. This system has many advantages over its competitors in the market. However, over the years, contractors have looked past these attributes and begun to look at forming panels simply as commodity products.
In this article I’m going to show that nothing could be further from the truth. The right set of panels can save you time, money, and last for years when taken care of properly. Specifically, the Advance Panel System stands head-and-shoulders above its peers. So I think it’s time that General Contractors, Agricultural Contractors, Forming Companies, and Landscapers all take a serious second look at this simple yet versatile system.

Did you know that an Eight-Foot Four Bar Advance Form currently sells for the same price – roughly $110 a foot – as it did in 1981? Over that same time period, wood and steel prices have tripled, wages have steadily risen, and the price of a house – the very structure for which the panels were initially designed – have increased fivefold. If an Advance Panel System was a good investment in 1981, it’s clear that it has become an even better investment today.

While General Contractors (GC) might not consider it worth it to buy their own set of panels, I would suggest we consider that question in the context of the residential construction market of 2019. This year has been a busy one. And sure, it’s nice to see healthy demand in the market. But if a GC is busy, then so are the forming subcontractors on which they rely. And if forming subcontractors are busy trying to keep up with their work, a GC’s timelines become increasingly dependent on their schedules.

So when you consider the costs of scheduling uncertainty, changing timelines, and delays, a GC investing in a set of panels of their own looks ever more prudent. Because the Advance Panel System is so easy-to-use, a General Contractor can take care of simple forming jobs in-house without relying on the availability of their forming subcontractor.

And what if you’re a GC that does a lot of steel structures? The four or five foot Advance Panel System may be of particular interest. With this system, a GC can easily construct pilasters into the wall of a building by using a few system panels and inside and outside corner pieces. A system like this can be obtained for as little as $65 per foot.

You can rely on the Advance Panel System to provide you with hundreds of smooth walls over their lifecycle. That’s because Advance forms are the only system readily available in Canada with a high-density (120/120) extra heavy-duty overlay to counter the abrasive quality of concrete. This quality craftsmanship also contributes to Advance forms lasting 10-20% longer than other competing products. Longer lasting forms ultimately reduce your cost. For instance, if you get 100 pours out of a system that costs roughly $100 per foot, that equates to $1 per foot of wall built.

The wonderful thing about the Advance Panel System is that it’s easy-to-use and can be used to tackle a variety of projects in the residential, agricultural, and commercial markets. Also, all of the hardware to lock the panels into place are attached to each form and corner piece. This means there will be no running around on the job site looking for wedges or keys that tend to get lost on each project.

Did you also know that you can form up to two foot by two foot columns with only four panels and four corners? No other system can compete with the speed and ease that the Advance Panel System offers in constructing such columns. One needs to simply calculate the time it takes to do so using standard formply, snap ties, and walers. You’ll be surprised how much faster you can accomplish this task with the Advance Panel System.

So whatever market in which you do forming work, consider whether the Advance Panel System could save you time and money. The professionals at Form and Build Supply are more than prepared to answer any questions you may have provide you with the best options available. And remember the ease and versatility of the Advance Panel System will eliminate your need for a carpenter on your next forming job.